The Joint Direct Attack Munition (JDAM) is a guidance kit that converts unguided bombs, or “dumb bombs”, into all-weather precision-guided munitions. JDAM-equipped bombs are guided by an integrated inertial guidance system coupled to a Global Positioning System (GPS) receiver, giving them a published range of up to 15 nautical miles (28 km). JDAM-equipped bombs range from 500 pounds (227 kg) to 2,000 pounds (907 kg). When installed on a bomb, the JDAM kit is given a GBU (Guided Bomb Unit) nomenclature, superseding the Mark 80 or BLU (Bomb, Live Unit) nomenclature of the bomb to which it is attached. 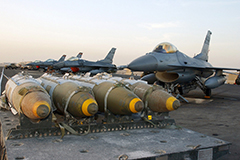 The JDAM is not a stand-alone weapon; rather it is a “bolt-on” guidance package that converts unguided gravity bombs into precision-guided munitions (PGMs). The key components of the system consist of a tail section with aerodynamic control surfaces, a (body) strake kit, and a combined inertial guidance system and GPS guidance control unit.

The JDAM was meant to improve upon laser-guided bomb and imaging infrared technology, which can be hindered by bad ground and weather conditions. Laser seekers are now being fitted to some JDAMs.