Hydroelectricity is electricity produced from hydropower. In 2015 hydropower generated 16.6% of the world's total electricity and 70% of all renewable electricity, and was expected to increase about 3.1% each year for the next 25 years. 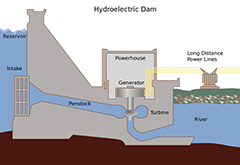 Hydropower is produced in 150 countries, with the Asia-Pacific region generating 33 percent of global hydropower in 2013. China is the largest hydroelectricity producer, with 920 TWh of production in 2013, representing 16.9 percent of domestic electricity use.

The cost of hydroelectricity is relatively low, making it a competitive source of renewable electricity. The hydro station consumes no water, unlike coal or gas plants. The average cost of electricity from a hydro station larger than 10 megawatts is 3 to 5 U.S. cents per kilowatt-hour. With a dam and reservoir it is also a flexible source of electricity since the amount produced by the station can be changed up or down very quickly to adapt to changing energy demands. Once a hydroelectric complex is constructed, the project produces no direct waste, and in many cases, has a considerably lower output level of greenhouse gases than fossil fuel powered energy plants. More details