Hurricane Katrina was an extremely destructive and deadly Category 5 hurricane that caused catastrophic damage along the Gulf coast from central Florida to Texas, much of it due to the storm surge and levee failure. Severe property damage occurred in coastal areas, such as Mississippi beachfront towns where boats and casino barges rammed buildings, pushing cars and houses inland; water reached 6–12 miles (10–19 km) from the beach. The storm was the third most intense United States landfalling tropical cyclone, behind the 1935 Labor Day hurricane and Hurricane Camille in 1969. Overall, at least 1,245 people died in the hurricane and subsequent floods, making it the deadliest United States hurricane since the 1928 Okeechobee hurricane. Total property damage was estimated at $125 billion (2005 USD), roughly four times the damage wrought by Hurricane Andrew in 1992 in the United States, and is tied with Hurricane Harvey of 2017 as the costliest tropical cyclone on record.

The storm originated over the Bahamas on August 23, 2005, from the merger of a tropical wave and the remnants of Tropical Depression Ten. Early on the following day, the new tropical depression intensified into Tropical Storm Katrina. The tropical cyclone headed generally westward toward Florida, and strengthened into a hurricane only two hours before making landfall at Hallandale Beach and Aventura, on August 25. After very briefly weakening to a tropical storm, Katrina emerged into the Gulf of Mexico on August 26 and began to rapidly deepen. The storm strengthened into a Category 5 hurricane over the warm waters of the Gulf of Mexico, but weakened before making its second landfall as a Category 3 hurricane on August 29, in southeast Louisiana. As Katrina made landfall, its front right quadrant, which held the strongest winds, slammed into Gulfport, Mississippi, devastating it. 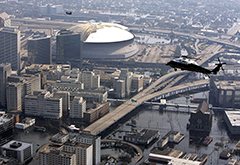 Over fifty breaches in New Orleans's hurricane surge protection were the cause of the majority of the death and destruction during Katrina on August 29, 2005. Eventually 80% of the city and large tracts of neighboring parishes became flooded, and the floodwaters lingered for weeks. According to a modeling exercise conducted by the U.S. Army Corps of Engineers (USACE), two-thirds of the deaths in Greater New Orleans were due to levee and floodwall failure. All of the major studies concluded that the USACE, the designers and builders of the levee system as mandated by the Flood Control Act of 1965, was responsible. This was primarily attributed to a decision to use shorter steel sheet pilings in an effort to save money. In January 2008, Judge Stanwood Duval, U.S. District Court, ruled that despite the Corps' role in the flooding, the agency could not be held financially liable because of sovereign immunity in the Flood Control Act of 1928. Exactly ten years after Katrina, J. David Rogers, lead author of a new report in the official journal of the World Water Council concluded that the flooding during Katrina "could have been prevented had the corps retained an external review board to double-check its flood-wall designs."