The early history of radio is the history of technology that produces and uses radio instruments that use radio waves. Within the timeline of radio, many people contributed theory and inventions in what became radio. Radio development began as “wireless telegraphy”. Later radio history increasingly involves matters of broadcasting.

The idea of wireless communication predates the discovery of “radio” with experiments in “wireless telegraphy” via inductive and capacitive induction and transmission through the ground, water, and even train tracks from the 1830s on. James Clerk Maxwell showed in theoretical and mathematical form in 1864 that electromagnetic waves could propagate through free space. It is likely that the first intentional transmission of a signal by means of electromagnetic waves was performed in an experiment by David Edward Hughes around 1880, although this was considered to be induction at the time. In 1888 Heinrich Rudolf Hertz was able to conclusively prove transmitted airborne electromagnetic waves in an experiment confirming Maxwell’s theory of electromagnetism. 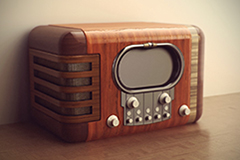 After the discovery of these “Hertzian waves” (it would take almost 20 years for the term “radio” to be universally adopted for this type of electromagnetic radiation) many scientists and inventors experimented with wireless transmission, some trying to develop a system of communication, some intentionally using these new Hertzian waves, some not. Maxwell’s theory showing that light and Hertzian electromagnetic waves were the same phenomenon at different wavelengths led “Maxwellian” scientists such as John Perry, Frederick Thomas Trouton and Alexander Trotter to assume they would be analogous to optical signaling and the Serbian American engineer Nikola Tesla to consider them relatively useless for communication since “light” could not transmit further than line of sight.

In 1892 the physicist William Crookes wrote on the possibilities of wireless telegraphy based on Hertzian waves and in 1893 Tesla proposed a system for transmitting intelligence and wireless power using the earth as the medium. Others, such as Amos Dolbear, Sir Oliver Lodge, Reginald Fessenden, and Alexander Popov were involved in the development of components and theory involved with the transmission and reception of airborne electromagnetic waves for their own theoretical work or as a potential means of communication.

Over several years starting in 1894 the Italian inventor Guglielmo Marconi built the first complete, commercially successful wireless telegraphy system based on airborne Hertzian waves (radio transmission). Marconi demonstrated the application of radio in military and marine communications and started a company for the development and propagation of radio communication services and equipment. More details