The Harrier, informally referred to as the Harrier Jump Jet, is a family of jet-powered attack aircraft capable of vertical/short takeoff and landing operations (V/STOL). Named after a bird of prey, it was originally developed by British manufacturer Hawker Siddeley in the 1960s. The Harrier emerged as the only truly successful V/STOL design of the many attempted during that era, despite being a subsonic aircraft, unlike most of its competitors. It was conceived to operate from improvised bases, such as car parks or forest clearings, without requiring large and vulnerable air bases. Later, the design was adapted for use from aircraft carriers. 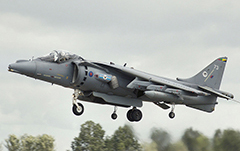 There are two generations and four main variants of the Harrier family, developed by both UK and US manufacturers.

The Hawker Siddeley Harrier is the first generation-version and is also known as the AV-8A Harrier; it was used by multiple air forces, including the Royal Air Force (RAF) and the United States Marine Corps (USMC). The Sea Harrier is a naval strike/air defence fighter derived from the Hawker Siddeley Harrier; it was operated by both the Royal Navy and the Indian Navy. During the 1980s, a second generation Harrier emerged; manufactured in the United States as the AV-8B and in Britain as the British Aerospace Harrier II respectively. By the start of the 21st century, the majority of the first generation Harriers had been withdrawn, many operators having chosen to procure the second generation as a replacement. In the long term, several operators have announced their intention to supplement or replace their Harrier fleets with the STOVL variant of the F-35 Lightning II, designated as the F-35B. More details