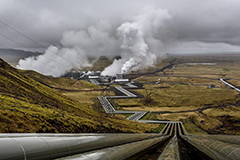 As of 2015, worldwide geothermal power capacity amounts to 12.8 gigawatts (GW), of which 28 percent or 3,548 megawatts are installed in the United States. International markets grew at an average annual rate of 5 percent over the three years to 2015, and global geothermal power capacity is expected to reach 14.5–17.6 GW by 2020. Based on current geologic knowledge and technology the GEA publicly discloses, the Geothermal Energy Association (GEA) estimates that only 6.9 percent of total global potential has been tapped so far, while the IPCC reported geothermal power potential to be in the range of 35 GW to 2 TW. Countries generating more than 15 percent of their electricity from geothermal sources include El Salvador, Kenya, the Philippines, Iceland and Costa Rica.

Geothermal power is considered to be a sustainable, renewable source of energy because the heat extraction is small compared with the Earth's heat content. The greenhouse gas emissions of geothermal electric stations are on average 45 grams of carbon dioxide per kilowatt-hour of electricity, or less than 5 percent of that of conventional coal-fired plants. More details