The Cypress Street Viaduct, often referred to as the Cypress Structure, was a 1.6 mile long, raised two-tier, multi-lane (four lanes per deck) freeway constructed of reinforced concrete that was originally part of the Nimitz Freeway (State Route 17, and later, Interstate 880) in Oakland, California. 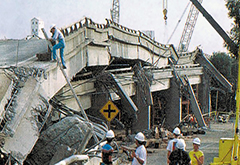 It replaced an earlier single-deck viaduct constructed in the 1930s as one of the approaches to the San Francisco–Oakland Bay Bridge. It was located along Cypress Street between 7th Street and Interstate 80 in the West Oakland neighborhood.

It officially opened to traffic on June 11, 1957 and was in use until the 1989 Loma Prieta earthquake, when much of the upper tier collapsed onto the lower tier, killing 42 people.

After the earthquake stopped (with no aftershock), local residents and workers began crawling into and climbing upon the shattered structure with the goal of rescuing those left alive. Many were saved, some only by amputation of trapped limbs. More details