The history of the camera can be traced much further back than the introduction of photography. Cameras evolved from the camera obscura, and continued to change through many generations of photographic technology, including daguerreotypes, calotypes, dry plates, film, and to the modern day with digital cameras.

Photography history and the evolution of the camera as we know them today is kind of similar to that in the sense that the very first versions of the camera, although considered ingenious in their time, had been very crude instruments of photography compared to the advanced and even smart cameras that people have today. 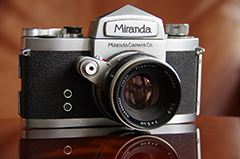 The very first “camera” was the camera obscura or the pinhole camera. This device in the timeline of photography history is said to date back to the ancient Greeks and the ancient Chinese. The device makes use of a pinhole to project the image but the resulting projection was upside down. It is said that Alhazen or Ibn Al-Haytham, a great authority in the field of optics, was later on known in photography history as the one who created the pinhole camera in 1000 AD.

In the earliest days of photography history, the camera obscura was used for watching solar eclipses, most notably done by Reiners Gemma Frisius from the Leuven University in 1544. Giovanni Batista della Porta recommended using this device as an aid for scientific drawings in 1544. It was in 1685 when Johann Zahn envisioned the first small and portable camera which is closer to the smaller gadgets known today. Although crude, the camera obscura which was the first device in the history of the camera that showed the first signs of the makings of a more advanced device which would lead to the development of cameras as we know them today. More details