The Brenner Base Tunnel is a planned 55-kilometre-long (34 mi) railway tunnel through the base of the Eastern Alps beneath the Brenner Pass. It will run from near Innsbruck, in Austria, to Fortezza, in Italy, replacing part of the current Brenner railway. The line is part of Line 1, the Berlin to Palermo route, of Trans-European Transport Networks (TEN-T).

The Brenner Pass, in the Alps at the border between Austria and Italy, is one of the most important traffic connections between northern and southern Europe, and the motorway going over it is infamous for its frequent traffic jams. Pollution from this traffic is a major concern. 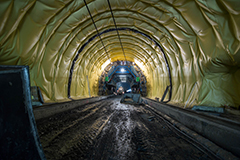 The hope is to relieve this situation by greatly improving the railway connection between North Tyrol and South Tyrol with the new tunnel, which will allow trains to cross the Alps much faster. Currently, speeds in the Brenner region barely exceed 70 km/h (43 mph) due to the steepness of the existing tracks, which cross the pass at an elevation of 1,371 metres above sea level.

The travel time from Innsbruck to Bolzano will be reduced from 2 hours to 50 minutes.

The project is funded by Austria and Italy, and a contribution by the European Union. Due to the magnitude of the project (it will be the world's second-longest tunnel, after the Gotthard Base Tunnel), the funding promised so far will not suffice for the estimated costs. The tunnel was scheduled to be completed in 2025. More details