The Atatürk Dam (Atatürk Barajı), originally the Karababa Dam, is a zoned rock-fill dam with a central core on the Euphrates River on the border of Adıyaman Province and Şanlıurfa Province in the Southeastern Anatolia Region of Turkey. Built both to generate electricity and to irrigate the plains in the region, it was renamed in honour of Mustafa Kemal Atatürk (1881–1938), the founder of the Turkish Republic.

The construction began in 1983 and was completed in 1990. The dam and the hydroelectric power plant, which went into service after the upfilling of the reservoir was completed in 1992, are operated by the State Hydraulic Works (DSİ). The reservoir created behind the dam, called Lake Atatürk Dam (Atatürk Baraj Gölü), is the third largest in the world. 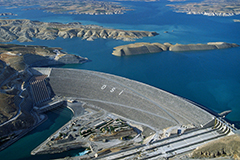 The dam is situated 23 km (14 mi) northwest of Bozova, Şanlıurfa Province, on state road D-875 from Bozova to Adıyaman. Centerpiece of the 22 dams on the Euphrates and the Tigris, which comprise the integrated, multi-sector, Southeastern Anatolia Project (Turkish: Güney Doğu Anadolu Projesi, known as GAP), it is one of the world’s largest dams. The Atatürk Dam, one of the five operational dams on the Euphrates as of 2008, was preceded by Keban and Karakaya dams upstream and followed by Birecik and the Karkamış dams downstream. Two more dams on the river have been under construction.

The HEPP of the Atatürk Dam is the biggest of a series of 19 power plants of the GAP project. It consists of eight Francis turbine and generator groups of 300 MW each, supplied by Sulzer Escher Wyss and ABB Asea Brown Boveri respectively. The up to 7.25-metre-diameter (23.8 ft) steel pressure pipes (penstocks) with a total weight of 26.600 tons were supplied and installed by the German NOELL company (today DSD NOELL). The power plant’s first two power units came on line in 1992[10] and it became fully operational in December 1993. The HEPP can generate 8,900 GWh of electricity annually. Its capacity makes up around one third of the total capacity of the GAP project.

During the periods of low demand for electricity, only one of the eight units of the HEPP is in operation while in times of high demand, all the eight units are in operation. Hence, depending upon the energy demand and the state of the interconnected system, the amount of water to be released from the HEPP might vary between 200 and 2,000 m3/s in one day. More details

The Largest Aircraft Carrier in The World​